Today at OutHistory’s blog, I (Dan) have a piece up about Ferguson, queer gentrification, and LGBT history, including AIDS and its disproportionate impact on queer African Americans. Go check it out! 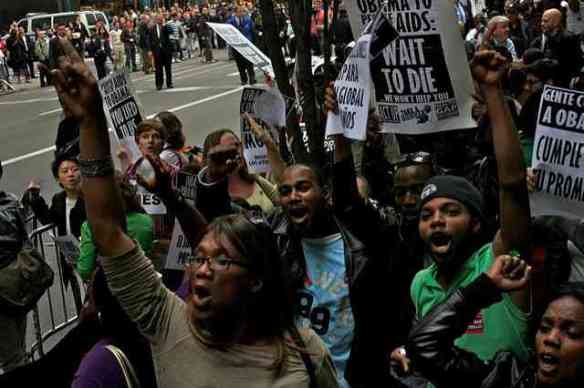 I was struck recently by a brief interview in OUT (or on their website anyway) with Peter Staley, a former member of ACT UP/NY and the Treatment Action Group (TAG), and one of the main protagonists in David France’s recent documentary, How to Survive a Plague. Staley laments the popular amnesia about the battles that he and many others fought in the 1980s and early 1990s to educate themselves and others about their disease, and to press for a government response to the epidemic. Although the film has raised some awareness among a new generation of gay men about the role of ACT UP and TAG in radically changing the meaning of HIV and AIDS for many in the United States, infection rates are still rising among gay men, and especially gay men of color.

Toward the end of the interview, Staley says, “We walked away in 1996, and it’s not over; it’s getting worse–and this time we’re not paying attention.” That’s true, up to a point. ACT UP did undergo a marked decline in the mid 1990s, but not everyone left the movement. ACT UP Philadelphia perhaps remained the most intact of the remaining chapters, as members worked to bring low-income people of color into the group by working with drug treatment programs, halfway houses, and AIDS service organizations with mostly poor and minority clients. Like many others fighting the HIV epidemic in black communities, they never “walked away,” and one goal of the African American AIDS Activism Oral History Project is to show that AIDS activism didn’t end in 1996 any more than the AIDS epidemic did.

The Staley interview resonated with me especially because I encountered it as I was preparing for a presentation at the annual meeting of the Organization of American Historians on ACT UP Philadelphia‘s evolving work during the late 1990s and early 2000s. Although the group worked on a number of issues, including prison healthcare, affordable housing, and federal funding for needle exchange, I spoke about their advocacy for low-priced medications for people living with HIV and AIDS in the developing world. With that in mind, I was delighted to see (via Joe.My.God.) an announcement that South Africa will begin offering a version of Atripla, which combines three antiretrovirals in a single pill, for only $10 a month. By way of comparison, the patented version of the treatment costs $2000 a month in the United States.

South Africa has its own tortured relationship to AIDS, including former President Thabo Mbeki support of HIV denialists, and astronomically high infection rates driven by structural inequalities that remain from the apartheid era. Given all that, it’s wonderful to see good news coming out of the country that reflects the hard-won gains made by an international coalition of dedicated treatments activists over the years, including Staley and ACT UP Philadelphia alike.

Via Joe.My.God.: Two protesters interrupted Paul Ryan at the Family Research Council’s Value Voters Summit, shouting, “Corporations are not people! Take the money out!” Although one of the women identified herself only as a “concerned citizen,” the other told reporters that she represented ACT UP Philadelphia, and in classic ACT UP fashion, had a bag full of press releases at the ready.

In the mid-90s, ACT UP Philadelphia began recruiting lower income people of color into the organization while other chapters nationwide went into decline. Along with the shift in membership, which reflected the “changing face of AIDS,” the group intensified its focus on issues of economic inequality in the AIDS pandemic, both at home and around the globe. In 2000, protesters from ACT UP Philadelphia and sister group Health GAP followed Al Gore on the campaign trail, demanding that generic HIV drugs be made available to the developing world. Their efforts have led some to credit the group(s) in part for George W. Bush’s announcement of the President’s Emergency Plan for AIDS Relief (PEPFAR) in 2003.

The ACT UP/TAG documentary How to Survive a Plague, which has a theatrical release set for September 22, has an official trailer…

…as well as a tumblr of ACT UP images that also invites users to submit their own artwork about current issues. 25 years later, the posters that ACT UP and the associated art collective Gran Fury put together are not only arresting, but sadly still relevant.

Gran Fury poster from 1988. Source: How to Survive a Plague

Gran Fury poster from 1987. Source: How to Survive a Plague

All signs point to this film being an out-and-out tearjerker; the trailer alone made me cry. But the larger point seems to be not just to elegize a movement and the millions lost to AIDS, but to inspire a new generation of activists to address their own social justice concerns. In his review, Frank Bruni testifies to the film’s sense of hope for the potential of mass action to effect real change. Indeed, last year’s Occupy movement seemed to echo ACT UP in its tactics and targets, if not in the precision of its message, and the two groups collaborated on an action in April and one over the Fourth of July, and members of ACT UP Philly helped train Philadelphia Occupiers in direct action methods when the encampment was in place late last year. While ACT UP has largely faded outside of a few strongholds in the urban mid-Atlantic (ACT UP Philadelphia being the only continuously active chapter, by their own claim) the growing economic inequality in the United States coupled with the energy of Occupy protesters has some hoping that a new truly progressive politics might be possible in this country. Whether it will materialize, and whether it will in the end look anything like ACT UP or Occupy remains to be seen.